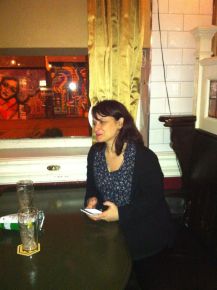 My name is Mirna, I live in Cambridge, MA.

These are the things I love.

When the radio plays my favorite songs and I recognize them right from the first musical notes.

To bake a cake and eat half of it before it cools down.

The movie “When Harry met Sally”; the scene when  Harry does the “Mexican wave” while telling to a friend about the failure of his marriage.

When Diego Armando Maradona played keepy-uppy with an orange.

Henry the Toulouse Lautrec’s paintings. My favorite one is: “La toilette“.